You know a side-dish is impressive when it is more memorable than the dish it was supposed to support.

This was the case with an incredible Taiwanese cucumber salad I ate at Fuhong Beef Noodles in Ximending District, Taipei.

This cucumber salad is unlike any you have eaten before. An unusual cross between pickled and cured cucumbers, this salad is sweet and sour, laced with aromatic sesame and garlic, and has a unique soft and crunchy texture that comes from an unusual curing step.

The end result is a uniquely refreshing side dish that is great served alongside any rich Taiwanese or Chinese-inflenced dish. Or if you’re like me, you’ll just keep a bowl of these addictive little cucumbers handy for snacking!

Of course you can save time by making quick-pickled cucumbers, but start them the night before by following this recipe and you end up with a Taiwanese cucumber salad that is not only authentic, but a real delicacy in its own right.

Where is this Taiwanese cucumber salad recipe from?

This Recreation Recipe is a direct recreation of the Taiwanese cucumber salad served at Fuhong Beef Noodles – a well-known beef noodle restaurant in central Taipei.

I came to this restaurant because a Taipei local had recommended their beef noodles as being the best in Taipei. Indeed the noodles were excellent, coming with soft slices of beef shank, homemade rustic noodles, and vibrant orange chilli ‘butters’.

Surprisingly though, when I looked back on the experience, it was the small plate of cucumbers that I kept dreaming about. Not only were they a perfect foil for the rich bowl of beef noodles, but they were delicious in their own right.

I have since spent time (and many cucumbers) getting to a recipe that faithfully recreates the texture and balance of tastes that I so liked in the original dish.

Read on for the results!

The noodles I was lucky enough to try at Fuhong Beef Noodles. Little did I know at this point that the little dish on the left would steal the show…

Click here to read the full review of Fuhong Beef Noodles, including the original Taiwanese cucumber salad dish this recipe is based on.

The original dish – how it tasted

Reading back on my experience, there are a few key elements that made this specific Taiwanese cucumber salad really great:

Although there is nothing difficult or technical required to make these cucumbers, you need to follow 3 steps to make them taste just like those I ate in Taipei:

1 – How to create that texture? Cure your cucumbers!

This was perhaps the hardest bit to work out.

I tried straight pickling – far too sour. I tried marinating in soy sauce – they were slimy and unseasoned in the middle. I’ll spare you everything I did, but in summary, I tried the lot.

In the end, there was only one way to do it – curing. This is nothing complex, it just means coating your cucumber slices in granulated salt and sugar and then leaving them a while, just like you might do when making cured salmon such as gravadlax.

My cucumbers after coating with salt and sugar

During this time, the seasoning will penetrate the cucumbers properly and the salt will pull water out of them. Excess water can be drained off at the end.

My cucumbers after curing overnight. Notice the pool of water sitting in the bottom, which has been pulled out of the cucumbers. Removing this improves the flavour and texture.

The end result is two-fold:

Your final cucumbers will have changed appearance entirely: bendy but still crunchy, more intensely flavoured, and seasoned to the core

The cured cucumbers, ready for marinating

Once you have achieved the desired texture, sweetness and saltiness, it is time to take your cucumbers to the next level. The second stage of marinating , consists of three ingredients:

This marination does not have to be anywhere near as long as the curing stage. 30 minutes is fine (although longer won’t harm it).

The vinegar you add at this stage is critical for making the cucumbers ‘sweet and sour’. I have read lots of Taiwanese pickled cucumber recipes, but these are not the same as they swamp the chillies in vinegar.

Although Taiwanese pickled cucumbers can be nice in their own right (especially paired with sweeter dishes), I far preferred the delicate balance of sweet, sour and salty that Fuhong Beef Noodles achieved in their cucumber salad.

To achieve this balance, I only add a touch of vinegar after the curing stage, enough to season but not overwhelm.

The sesame aroma was the most noticeable flavour of the original cucumber salad dish, and so is key to get right.

There is only one rule to follow – the oil should be drizzled over the cucumbers just before serving. Why? I found that the longer you left it sitting with the cucumbers and vinegar, the less fresh it tasted. The exact flavour change is hard to describe, but something about leaving it stewing with the vinegar, garlic etc detracted from that beautifully fragrant sesame aroma.

What cucumbers to use? Size doesn’t matter

At Fuhong Beef Noodles in Taipei, they used mini-cucumbers, which had been halved lengthways, cored and cut into roughly 1.5cmx6cm batons.

I have used the standard larger cucumbers you get in the UK and they are just as good really, so don’t worry if you can’t find the smaller ones.

Just make sure you cut them into something close to 6cmx1.5cm batons, which may involve quartering the larger cucumbers.

And whatever cucumber you use, always core it by scraping out the translucent seeds with a teaspoon. The seeds are too watery, have no texture and don’t take up much flavour.

My cored cucumbers, sliced into batons for my Taiwanese cucumber salad

Which vinegar to use?

I think it is safe to assume that they use a Taiwanese vinegar in their cucumber salad at Fuhong Beef Noodles. However, any standard vinegar will do really, as you are only using it for a touch of sourness and any subtle flavour in the vinegar will be lost amongst the garlic and sesame.

I used a standard white wine vinegar, although rice vinegar would probably be a closer match if you have it.

How long does this Taiwanese cucumber salad keep?

Once made, the cucumber salad will last at least 1 week in the fridge. There is no need to eat them quickly, I think they actually get better over time.

I like to make a big batch and then keep in the fridge all week, both for snacking and serving alongside other meals.

What to serve with this Taiwanese cucumber salad

As I mentioned in the intro, I like this salad so much that I can just eat them outright!

However, they are normally considered a side dish to be served with richer Taiwanese dishes, and are a common accompaniment to Taiwanese beef noodle soup.

I like them alongside any rich Taiwanese, or indeed Chinese-influenced dish.

Adjusting the sweetness/sourness of your Taiwanese cucumber salad

This recipe is on the sweeter side because that is the way they serve it at Fuhong Beef Noodles (the Taiwanese are generally fairly keen on sweetness, especially alongside the otherwise rich and spicy dish that is beef noodle soup). I also really liked the balance they had.

However, if you are planning to serve Taiwanese cucumber salad alongside a sweeter dish, then personally I would consider altering the sugar/vinegar levels to push them more to the sour side.

Then try this guest recipe for authentic pad fak tong (an unusual Thai pumpkin stir fry), which comes from a working kitchen in Thailand. 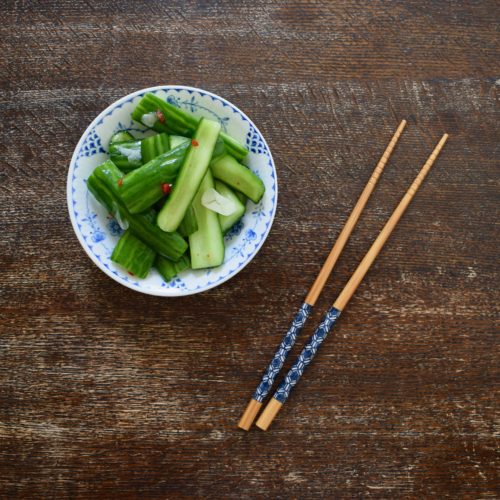 A sweet and sour cucumber salad, laced with aromatic sesame and garlic, with a unique soft and crunchy texture that comes from an unusual curing step.
Prep Time5 mins
Curing Time12 hrs
Course: Side Dish
Cuisine: Taiwanese
Servings: 4 people (as a side)

I created Make That Dish to share knowledge with other amateur cooks by writing recipes with context.  To read more about the site and my story, click here.

To browse latest recipes or search by ingredient/cooking method, click here. Or use the tool below to filter by cuisine (tick ‘recipes’ and then your cuisine of choice).

Or, if you are planning a trip soon and need specific recommendations, then filter by location below (tick ‘reviews’ and then your location of choice).